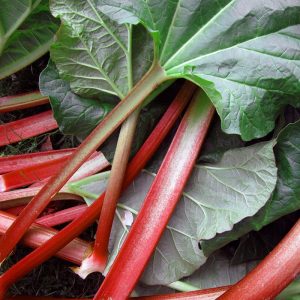 Rhubarb isn’t for everybody.

This truth was impressed upon me as a child, when my mother brought home some fresh rhubarb from a neighbor’s garden. She called it pieplant, and made it into a pie. I made for my bedroom. I’d rather do my homework than eat rhubarb pie. It tasted like medicine.

No wonder. One variety of the plant—native to China—was a medicine. Some five millennia ago, the Chinese were using the dried, powdered root as an effective laxative, and more. Over the centuries, they considered this plant one of their most important medicines, and used it to treat everything from the plague to the stomach-ache.

When Marco Polo reported on his trip to China in the late 13th century, he wrote of this miracle plant with such enthusiasm that people who read about it were desperate to get their hands on it. Turns out that everybody, every now and again, needs a bit of a . . . well, you know.

Unfortunately, the root wasn’t easy to transport and the plant itself didn’t thrive in Europe. By the time of Henry VIII, powdered Chinese rhubarb root—when you could find it—was twice as expensive as opium, four times more costly than saffron, and almost worth its weight in gold.

But the price of rhubarb was about to take a dive. In the 1630’s, Sir Matthew Lister brought a Siberian variety, via Italy, to England. While this rhubarb wasn’t as potent a laxative as the Chinese plant, at least it would grow. For a while, British folk cultivated it just for the root. And then, in 1817, botanists at the Chelsea Physic Garden discovered that when they covered the crowns (the underground part of the plant) with soil, the plant produced a luscious bouquet of tart pink stems and frilly light green leaves.

That was the beginning of a rhubarb boom, so to speak, and soon this tasty vegetable was on everybody’s shopping list. In a chilly climate where fresh fruits were difficult for ordinary folk to find in winter, its tart, fresh taste was a treat. And since it is high in vitamin C, it was a healthy addition to the menu. The leaves weren’t edible—they contain oxalic acid that can cause the tongue to swell and make breathing difficult. But the stalks were used, with plenty of sugar, to make desserts pies, jams, sauces, and even wine.

China is a world away. Five millennia is a long time ago.

But rhubard just keeps on growing.