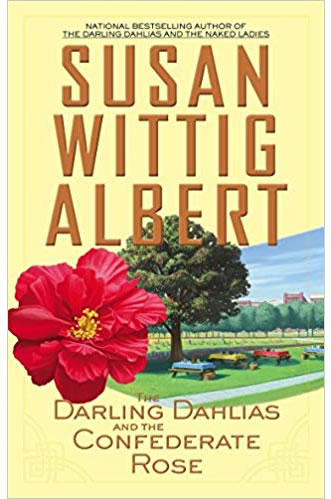 “Charming characters, a fast-paced plot, and a strong sense of history help make this a superior cozy.”
—Publishers Weekly

Just in time for the Confederate Day celebration, the Darling Dahlias are ready to plant Confederate roses along the fence of the town cemetery. Of course, Miss Dorothy Rogers, club member and town librarian, would be quick to point out the plant is in fact a hibiscus.

The Confederate rose is not the only thing that is not what it appears to be in this small Southern town. Earle Scroggins, the county treasurer, has got the sheriff thinking that Scroggins’ employee Verna Tidwell (also the Dahlias’ trusted treasurer) is behind a missing $15,000. But Dahlias president Liz Lacy is determined to prove Verna is not a thief.

Meanwhile, Miss Rogers has discovered her own mystery—what appears to be a secret code embroidered under the cover of a pillow, the only possession she has from her grandmother. She enlists the help of newspaper editor Charlie Dickens, who suspects that the heirloom may have larger significance–and a connection to a famously well-connected Confederate female spy.

With missing money, secret codes, and the very strange behavior of one resident, Darling, Alabama, on the eve of Confederate Day, is anything but a sleepy little town…

Read Chapter 1 – The Darling Dahlias and the Confederate Rose

“A nostalgic first in a new Depression-era mystery series…Albert combines great period detail with surefooted sleuthing that should satisfy fans and attract new ones.”
—Publishers Weekly

“Albert…hits all the right notes in this series debut. The plot’s believable, the Southern color brims with authenticity, and the characters are charmingly and realistically drawn… The Darling Dahlias and the Cucumber Tree blooms with success, and here’s hoping the ladies have many more opportunities to dig into crime.”
—Richmond Times-Dispatch