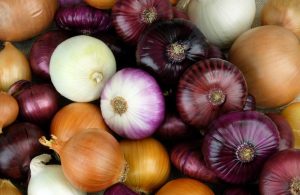 They’ve been around all your life. You’ve avoided them, indulged in them, and maybe even been embarrassed by them. For, after all, there is nothing quite so smelly as the ordinary, extraordinary onion.

But I’ll bet there are things about onions you don’t know. You’re probably not aware that the inhabitants of the ancient Egyptian city of Pelusium worshipped the onion and consecrated it to the gods. (They loved garlic, too, almost as much.)

In other cultures, it was the devil who was associated with the onion. In Persia, it was said that when Satan was banished from paradise, onions sprang from the print of his right foot. And the early Greeks believed that the onion, which was ruled by the planet Mars, exercised an attractive force so powerful that it could pull the magnetism right out of the rock magnetite.

It might have been this association with the masculine Mars that gave the Romans the idea that eating an onion would increase the quantity and vitality of sperm. Maybe the onion’s purported attractive force suggests why some Middle Eastern cultures considered it an aphrodisiac. This magnetism might also be the reason the eighteenth-century herbalist Nicholas Culpeper thought that an onion could draw poison from the bite of a venomous snake or a rabid dog. It might also explain, too, why American colonists hung onions outside their doors. They hoped it would attract, and deflect, any evil spirits who attempted to come inside.

There are plenty of modern folks who believe that the onion has a magnetic personality. As late as the 1950’s, in England, people were hanging the cut half of an onion in the house to attract infectious germs out of the air. A friend’s mother remembers putting a small hot onion in her ear to draw out the pain of a childhood earache. And I recently read in a contemporary magazine that rubbing a bee sting with a raw onion will remove the pain.

Superstition or not, you’ve got to admit that the onion exerts a powerful force. Think about it the next time you slice into one of these pungent beauties.