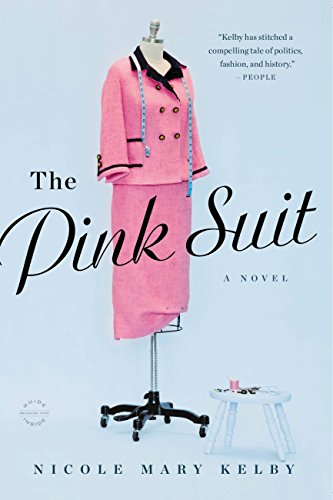 “What a strange power there is in clothing.”–Isaac Bashevis Singer

The Pink Suit (Little, Brown, 2014) is the story of Kate, a talented Irish seamstress who works in Chez Ninon, a New York fashion house that has been commissioned to copy a Chanel suit, in raspberry pink, for the First Lady–the pink suit that Jackie Kennedy was wearing when her husband was assassinated.

But the heart of the story isn’t Jackie’s suit: it’s Kate’s obsession with making a perfect copy of a Chanel suit (a knockoff, in fashion terms) and what that tells us about a young woman whose entire life is focused on creating perfectly beautiful garments for Perfectly Beautiful People. In fact, when the story begins, Kate has no other life. Even her relationship with her sister is defined by her gifts of copied clothing, and she very nearly rejects Patrick, a butcher (what a telling occupation!) for Mr. Charles, who wants her to work for him in his new fashion house.

The strength of this beautifully constructed, highly stylized novel is the skillful way Kelby assembles its many significant elements. Obsession with beauty and perfection. Copying (with and without permission) and fakery as an essential part of the fashion industry. High-fashion, artistically-styled clothing as a concealment for unpleasant realities. Clothing as a symbol of role and social status: the Wife, the First Lady, Her Elegance (Jackie’s name never once appears). Details of fine fabric and exquisite stitchery, like the details of a painting or a sculpture. Ireland and Inwood (the Irish neighborhood in which Irish Kate lives) and the Irish Kennedy connection. America as the home of knockoff artists. And more, much, much more.

But through a series of events that are historically true and terrifyingly real (yes, the Inwood explosion really happened), Kate learns that the world of fashionable fakery is not a world she can live her life in. Real people need real work, real hopes, real love. While it is true that “a woman in a beautiful suit can go anywhere,” the only place Kate is able to wear her personal and unauthorized copy of The Wife’s pink suit is a knockoff amusement park, where she is soon discovered as a fake First Lady.

If there’s anything unconvincing about The Pink Suit, it is the ending, where the suit is revealed not as a symbol of forgiveness (that was wrong) but as a symbol of strength. That may be, but it happens too quickly, almost clumsily, so that the revelation feels not-quite-earned. This is a minor flaw, though. It doesn’t compromise the original design and beautiful execution of this daringly ambitious novel. Read it, enjoy it, but most of all think about it.

And then go look in your closet.

20 comments on “Bookscapes: The Pink Suit”