As a writer, I’ve always been deeply interested in the relationship between women and their houses–especially when the house becomes something more than just a roof over a woman’s head. “The house” has been a feature in the lives of many of the women I’ve written about. Beatrix Potter, for instance, the British children’s book author-illustrator who was the protagonist in my Cottage Tales series, eight novels about Beatrix’s life in the little village of Near Sawrey, in England’s Lake District. 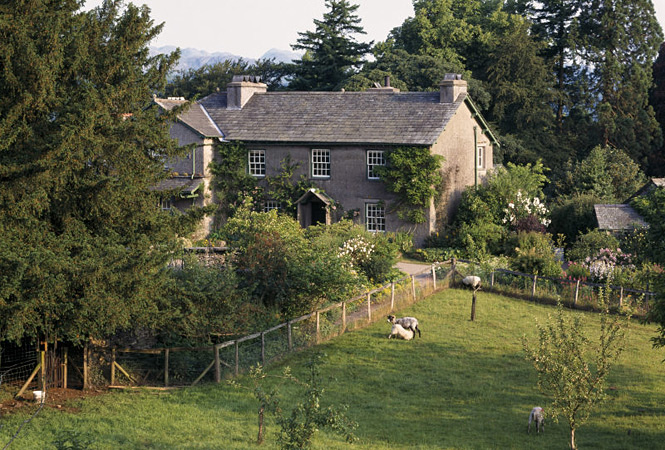 This is Beatrix’s enchanting cottage on 30-acre Hill Top Farm, which she bought in 1905. At the time, she was 39 years old and a spinster, the only daughter of wealthy London parents who expected her, in true Victorian fashion, to devote herself to taking care of them.

Beatrix had other ideas. She was a devoted daughter, but she found her parents’ London life too confining and their expectations of her too limited. She was quietly, defiantly determined to become independent. So she used the money she had earned from the sale of The Tale of Peter Rabbit  and other books to buy a run-down farmhouse in a tiny village a day’s train-ride from London.

It wasn’t easy for a big-city offcomer to find acceptance among the standoffish North Country villagers. But Beatrix–never one to “put on airs”–was determined to become a villager herself. In her quiet way, she integrated herself into the life of the village, adopting their furnishings, their foods, their dress, and their customs. As time went on, she grew into the larger life of the Lake District, becoming a deeply-respected breeder of endangered Herdwick sheep and a staunch conservationist. She used her inherited family wealth and the income from the sale of her “little books” to purchase 14 farms on 4,000 acres of precious north-country land, which she donated to the National Trust. Her aim: to preserve a landscape and a lifeway that was in danger of disappearing forever.

Now, I’m working on a book about Georgia O’Keeffe-, another artist who, like Beatrix, was determined to have a house of her own in a faraway place–far away, that is, from the New York life she lived with her husband and art agent, Albert Stieglitz. Like Beatrix, she was declaring her independence, not only from Stieglitz but from the way the New York art critics defined her work. In 1940, O’Keeffe used money from the sale of her art to purchase a summer home: an adobe house at Ghost Ranch, a remote New Mexico guest ranch in the Piedra Lumbre valley. Five years later, she bought the crumbled ruins of a second adobe, a hacienda with three acres of walled garden in the tiny pueblo village of Abiquiu. Her friend, Maria Chabot, rebuilt it for her: a labor of love that was not returned as Maria might have wished.

Maria ran up against a great many challenges in the rebuilding of the Abiquiu house. The villagers resented O’Keeffe’s purchase, and while the use of traditional methods and materials required the help of the local Hispano-Indian men, Maria–an assertive Anglo woman with a let’s-get-it-done style–had to work to win their cooperation. The post-war home-building boom and the continued expansion of nearby Los Alamos made building materials hard to get. The weather limited the available construction time. Stieglitz had died, and O’Keeffe was spending most of her time in New York untangling his affairs. She was often too occupied there to have much timely input into important decisions at the house site. And Maria had to fit her house-building into her other obligations: she was dealing with ill, elderly parents in San Antonio and managing Los Luceros, a large farm in the Rio Grande valley. All things considered, it’s something of a miracle that she got things done. In 1949, the house was finished and O’Keeffe became a resident.

But while the artist made several financial contributions to the life of Abiquiu, she held herself carefully aloof from it, a patrona who insisted on maintaining a safe distance between herself and the native villagers at the same time she depended on them to do the work that maintained her lifestyle. And unlike Beatrix Potter, who furnished her north-country home with the same north-country furniture and crafts as her neighbors, O’Keeffe turned her Pueblo-style home into a gallery, not for native furnishings or crafts but for her personal iconic artistic aesthetic: sleek mid-century modern furnishings, influenced by her lifelong interest in the Orient (witness the many kimonas in her closet).

Teachers often tell young writers to “write what you know.” I’ve never been happy with that advice. For me, writing what I don’t know is far more interesting because it forces me to learn something new. Right now, I’m learning about Chabot, O’Keeffe, and their house-building–so different from what I learned about Beatrix Potter and her house-building. And Rose Wilder Lane, too–who emptied her bank account to build that stone house that her mother, Laura Ingalls Wilder, never enjoyed. And Lorena Hickock, who lived in both Eleanor Roosevelt’s White House and in her own little white house on Long Island.

Women and their houses–a fascinating subject for a story, don’t you think? Share yours . . .