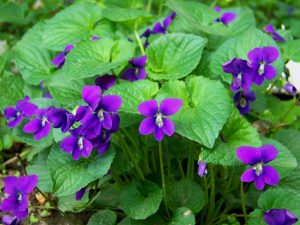 According to Greek mythology, violets helped to get the god Zeus out of a bad bind.

You see, he fell in love with a priestess named Io. This wasn’t the first time for the philandering Zeus, so when his wife Hera found out, she was understandably miffed. To keep Io out of his wife’s way, Zeus turned her into a white heifer. When Io-the-heifer complained that she had nothing to eat, he created a field of violets for her—and while he was at it, he probably sent a bunch of violets to Hera, as an apology. The flowers soothed the jealous goddess, so the Greeks began using them to calm anger and induce sleep.

Zeus wasn’t the only Lothario to send violets to his spouse. Napoleon Bonaparte’s wife Josephine loved violets. She wore them on her wedding day, and Napoleon (who wasn’t the most faithful husband on record) sent her a bouquet of purple violets every year on their anniversary. He adopted the plant as his political emblem, and when he was banished to Elba, he promised to “return with the violets.” While he was in exile, his followers persisted in wearing the flower as an emblem of their own loyalty, even when a law was passed against it. After Waterloo, Napoleon reportedly visited Josephine’s grave, picked a few violets he found growing there, and kept them in a locket he wore until his own death.

In the Middle Ages, Hildegard von Bingen used violet juice as the basis for a cancer salve. In the sixteenth century, violets were widely used to treat insomnia, epilepsy, pleurisy, and rheumatism. A couple of hundred years later, Nicholas Culpeper wrote that the plant was ruled by the planet Venus. This made it a natural as a treatment for throat ailments, since Venus also ruled the throat. They are, he said, “a fine, pleasing plant of Venus.”

In fact, violet leaves and stems do contain a soothing mucilage, as well as salicylic acid, the precursor of aspirin. They’re also rich in vitamins A and C, and for people who didn’t have access to fresh veggies in the winter, an early spring salad of violet leaves was a very good idea. The flowers themselves taste sweet, and they’re often made into syrup or even marmalade. You may have seen them in popular cookbooks, candied or crystalized and used to decorate pastries or cakes.

Sweets to the sweet, then—and even to the not-so-sweet.

I’ll bet Hera was charmed by that bunch of violets she got from Zeus.