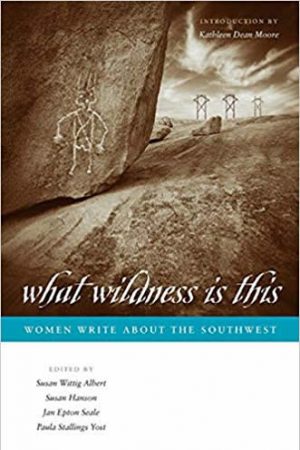 “”A fitting tribute to the rugged complexity of the Southwest from the pens of a diverse group of women writers.”
— El Paso Times

How do women experience the vast, arid, rugged land of the American Southwest? The Story Circle Network, a national organization dedicated to helping women write about their lives, posed this question, and nearly three hundred women responded with original pieces of writing that told true and meaningful stories of their personal experiences of the land. From this deep reservoir of writing—as well as from previously published work by writers including Joy Harjo, Denise Chávez, Diane Ackerman, Naomi Shihab Nye, Leslie Marmon Silko, Gloria Anzaldua, Terry Tempest Williams, and Barbara Kingsolver—the editors of this book have drawn nearly a hundred pieces that witness both to the ever-changing, ever-mysterious life of the natural world and to the vivid, creative, evolving lives of women interacting with it.

Praise for What Wildness Is This: Women Write about the Southwest

“What makes this different from other anthologies of nature writing? Written entirely by women, the authors are an integral part of each story or poem. Kathleen Dean Moore says in the foreword that they “break down the cultural constraints of…European ideals of ‘man and nature’…and “Man as individual,…distinguished by the presence of mind from all of nature, which is as lifeless as a millstone.” Co-editor Susan Wittig Albert says that the editors were looking for writers who had experienced the natural world “not as Nature, objectively…’out there,’ but in a deeply personal, intimate and self-revealing way ‘in here.'”
—Linda Wisniewski, StoryCircleBookReviews.org