One of the pleasures of living here at MeadowKnoll is the close company of animals, some domestic, many wild. Over the years, we’ve raised cattle, sheep, geese, ducks, peacocks, guineas, chickens, dogs, and cats. Our 31 Hill Country acres are a permanent home to coyotes, raccoons, possums, nutria, foxes, deer, squirrels, snakes, and (unwelcome!) feral hogs, among other smaller creatures. It is on a north-south Plains flyway and hosts a gazillion migratory and resident birds, including buzzards, hawks, and owls. With all these occupants, it wouldn’t be odd if sometimes there were territorial disputes: who goes where and when, who nests where, who eats where and what. 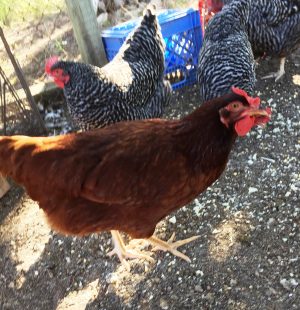 Most recently, it was the who-eats-what that confronted us, for one of our chickens came up missing. Rhodie Red was a beautiful Rhode Island Red hen with shiny feathers and a stunning red comb and wattles. She laid luscious dark brown eggs. She was the single survivor of a pair of Rhodies, her sister having been killed by a small but ambitious snake who caught her asleep on her roost in the coop one night. He was big enough to kill her, but not quite big enough to eat her. We buried her with full honors.

Rhodie Red disappeared without a trace–without leaving a single feather behind–just before sunset one evening, when the chickens were all in the back yard, close to the house. Molly (our heeler) would have alerted us to a dog. Coyotes and foxes don’t come into the yard. And Rhodie Red was too big for our red-tailed and Cooper’s hawks to make off with. We’ve had chickens taken by stray dogs, but they’ve always left a trail of feathers to mark their getaway route. No feathers marked the site of Rhodie Red’s abduction, however. It wasn’t until the next week that Bill found a few red feathers under the Bois d’arc tree at the edge of the woods–which also happens to be a favorite roost of one of the great horned owls.

So I’m guessing that our who-dunnit has been solved. Rhodie Red was snatched and eaten by an owl, some of whom grow quite large here. I miss her, yes. She was my favorite of this little flock, always ready to be picked up and cuddled. I’ll miss her eggs, too, and her cheerful cackle.

But it doesn’t seem a terrible fate, somehow. If I believe that we are what we eat (and I do), I must also accept its corollary: We become what eats us. If Rhodie Red was eaten by an owl, she has become that owl, has become not just a temporary meal but part of that owl’s cellular structure, its hollow bones, its blood and skin, its astonishing feathers, its terrifying beak, its claws. Part of its magical life, its haunting call, its fierce, silent flight.

The next time I hear an owl, I’ll think Maybe this is Rhodie Red, transformed. I will be glad to have shared such a fine young bird with such a splendid creature. Truth be told, I wouldn’t mind becoming an owl, myself.

More (and fascinating) reading: Was an Owl the Real Culprit in the Peterson Murder Mystery?