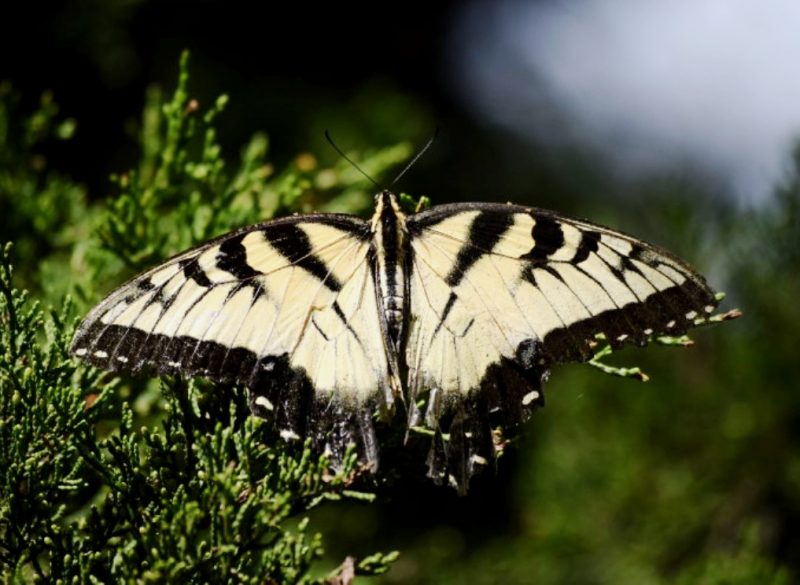 August and September are butterfly months here in the Texas Hill Country. The blue mistflower (wild ageratum, Conoclinium coelestinum) is blooming, and the blooms seduce whole flocks of queen butterflies. When I walk past the mistflower bed dozens of queens flutter up, disturbed–the minute I’m gone, they settle back again. There are painted ladies, viceroys, fritillaries, big sulphurs, and little yellows. And swallowtails: black and spicebush and pipeline and this gorgeous tiger, taking a breather on a juniper branch.

It’s spider and snake month, too. A golden orb spider has draped her web over the chicken coop window, so I have to be careful when I open it. And I’ve missed capturing a good-sized snake twice. By the time I got the nest-box lid propped open and had the snake stick in my hand, he had prudently disappeared. But I remind myself that an egg or two a week is a small price to pay for the job he does keeping the mice out of the chicken feeder. Ah, life in the country . . .

On the writing desk. I just finished the first pass through the copyedited manuscript of The Darling Dahlias and the Red Hot Poker. The copy editor will clean up all the changes (not very many, this time). Then it goes to the book’s layout editor. The cover artist will be done with her work soon (stay tuned for a cover reveal!). Looks like it will probably be in your hands by April 2022. The book is set in 1935, the fifth year of the Great Depression, the Labor Day hurricane that ripped across the Florida Keys, and Huey Long (a hurricane of another sort) decided to run for president.

Also in progress, a still-untitled novel about the friendship of Maria Chabot and Georgia O’Keeffe, the friendship that produced the marvelous O’Keeffe house in Abiquiu, New Mexico. The book is based on a collection of letters the two women exchanged between 1940-1950, when Georgia was in New York and Maria was in Texas and New Mexico. The letters themselves are wonderful, richly documenting a turbulent decade that shaped the lives of two fascinating women. It’s not only the decade in which O’Keeffe reached a new pinnacle of fame as an artist, but the decade in which her famous husband died–and the decade of WW2, at that. It’s an unparalleled collection and a beautifully rich resource for biographical fiction. But if you read it, beware of the editorial interventions. One of the editors wants to narrow your understanding and tell you what the letters mean. Don’t let her do that.

The release of Hemlock, China Bayles’ latest adventure, has been a little ragged. The “official” release date is September 7, still a couple of weeks away. But Barnes and Nobel seems to have shelved the book already (both the hardcover and the paperback), and Amazon is apparently shipping the paperback. Both the audio and the ebook editions will be released on 9/7. And your library should still be able to order it, if they haven’t already. Please ask.

And of course, there’s needlework. Isn’t there always? This one, in honor of my current writing project, is a version of O’Keeffe’s “Red Canna,” a series she painted in the 1930s. 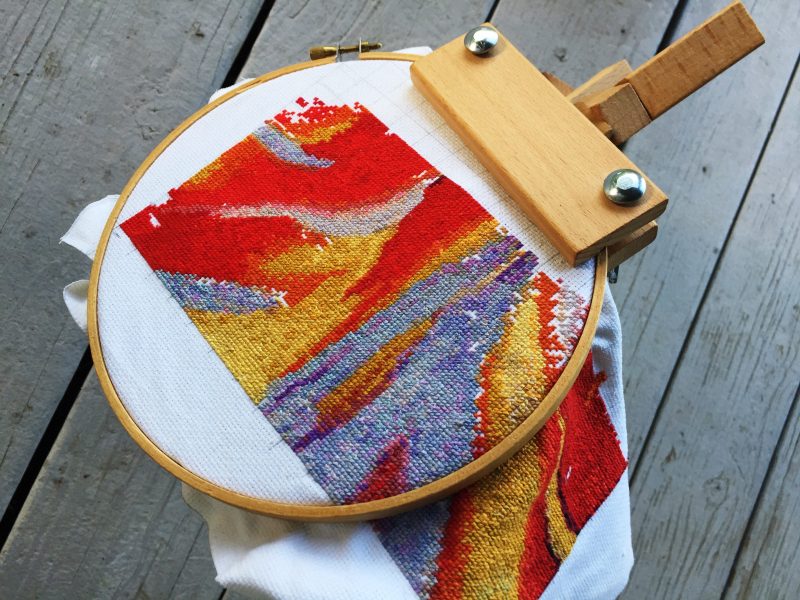 Reading Note: Whether you succeed or not is irrelevant, there is no such thing. Making your unknown known is the important thing–and keeping the unknown always beyond you.–Georgia O’Keeffe