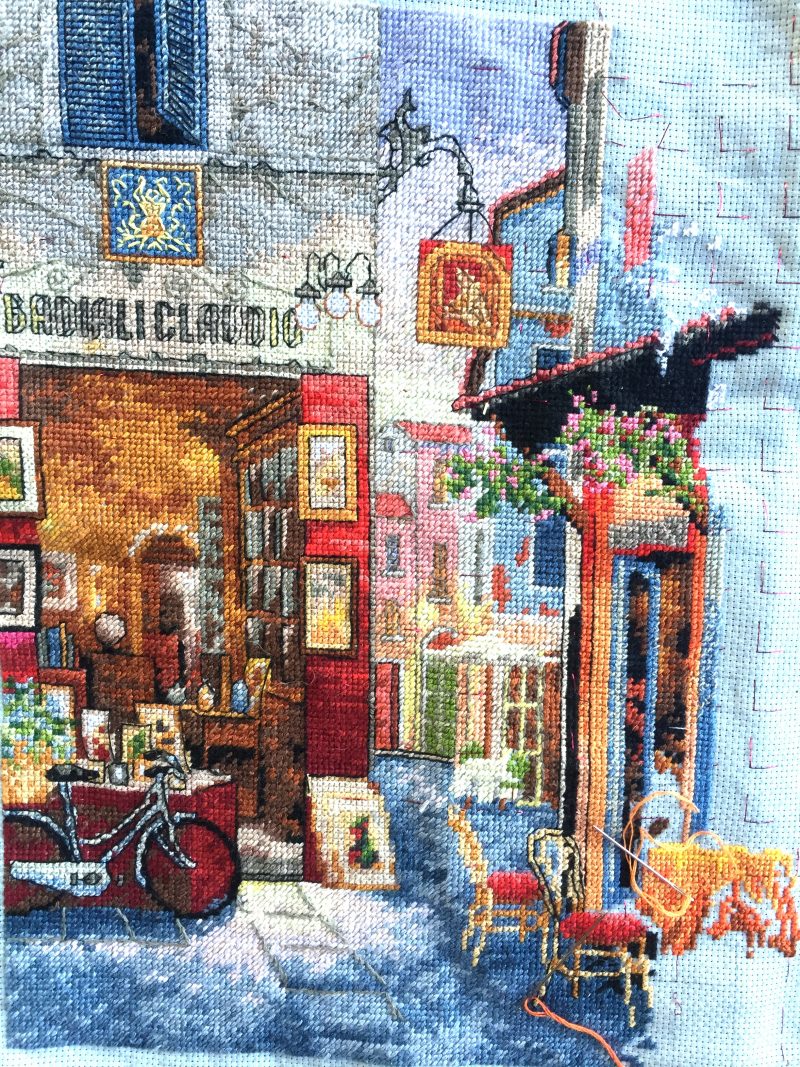 The current cross stitch project. This one is a Dimensions kit called “European Bistro”–16″ x 11″ on Aida cloth, 18 count, so it’s big and a bit picky. I started it in April 2020, and it’s going pretty fast–except that I haven’t done much of the detailing yet–the outlining that creates the illusion of depth and makes the individual elements stand out. You can see some of that on the left side, where I’ve done a bit of it: picture frames, window, sign–but not the bike tires.

There’s also lots of half-cross, which (counter-intuitively) is harder to do than cross-stitch because all of it has to have the same tension. The red crisscross is the red nylon grid I put in to mark the fabric in 10×10 blocks, making it easier to see where you are. I wouldn’t try this without some kind of gridding.  And yes, I always start in the upper left.

This project is about 40% finished, if you don’t count the detailing. I enjoy big projects because I don’t waste a lot of time stopping and starting. This one has so many varied components that it’s never boring. Well, almost never.  At the rate I’m going, I’ll finish it early next year. If you can do this without a magnifying lamp, your eyes must be much better than mine.

The current book project. Some of you may remember that last year, I started a China Bayles mystery called Hemlock. I was almost halfway through the book when I injured my back and had to turn to something easier and less complicated (the novellas). Since then, I’ve now done two novella series, both set in Pecan Springs: one featuring China’s sidekick Ruby Wilcox, the other featuring crime reporter Jessica Nelson.

I’ve also just finished a third project: The Darling Dahlias and the Voodoo Lily. It goes to the copy editor tomorrow, then to the layout editor, who puts it into print and ebook form and adds the cover, which is already completed. You’ll have it in October or November, when it may give you a little respite from the election and its aftermath.

Now, I’ve gone back to Hemlock, another two-story novel, like Wormwood, Widow’s Tears and Queen Anne’s Lace. The frontstory takes place in North Carolina, where China has been asked to investigate the theft of a unique and valuable book, Elizabeth Blackwell’s A Curious Herbal. The backstory takes place in the 1730s in London and explores why and how Elizabeth created the book and what happened after that. I’m loving the project, but it is layered and twisty and a challenge to put together in a comprehensible way. There are lots of details that create the illusion of historical depth–a little like the “Bistro” project. Look for it in early spring, 2021, when we’re all living with whatever happens in the election.

Whatever your current work-in-progress, I hope you are staying safe and sheltered in this crazy Covid summer. As I write this, there is a gathering of a quarter of a million mostly unmasked bikers in South Dakota, a crowded and potentially super-spreading event. This is nuts. Please don’t do it. Be safe.

Reading note. The most important things to remember about backstory are that (a) everyone has a history and (b) most of it isn’t very interesting. Stick to the parts that are, and don’t get carried away with the rest. Life stories are best received in bars, and only then an hour or so before closing time, and if you are buying.–Stephen King