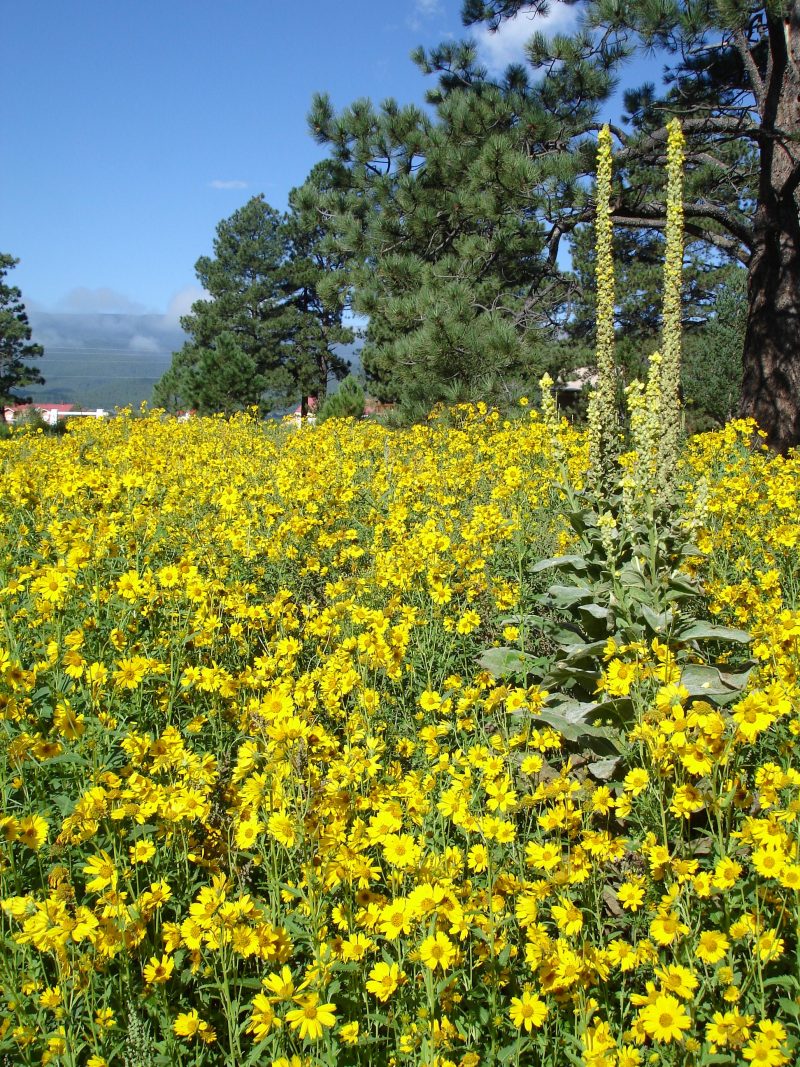 It’s late summer here in the New Mexico mountains, almost autumn, and the meadows are filled with the rich gold of sunflowers, accentuated by tall spires of mullein. We’ll be here another week or so, enjoying the warm days and crisp, cool nights–a big change from the uncomfortable heat and humidity back in Texas. The skies, too, are crystalline, and the stars at night are diamond pinpricks against an infinity of black. No haze, no light pollution. Just. Stars. 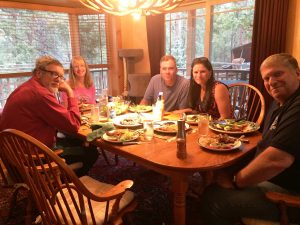 Bill and I spent a lovely Labor Day weekend with family in the Colorado Springs area: daughter Robin and husband Jeff (table ends), niece Abby and husband Tyler and their two girls. Robin and Jeff are master scuba instructors with over 800 dives to their credit; Abby and Tyler are career Air Force, both are pilots. Abby commands Wings of Blue, the Air Force parachute team. Awesome achievements, all!

On the writing desk: not much this week. I’m currently working on another novella trilogy, this one featuring crime reporter Jessica Nelson, who first appeared in Mourning Gloria. The triology will be published early next year in digital and (later) in print–audio too, likely.

But I’m mostly cleaning up a few little publishing chores this week. I want to move the recipes from the old websites to this new WordPress site–hoping to get that done in the next couple of days. Thanks to those of you who’ve suggested that I do a cookbook. Instead, I’ll try to get all the book recipes posted, so you can have them, free. Which will take a while, so please be patient.

On the reading list: I’ve been digging into true crime, one of my favorite genres. Currently reading The Five: The Untold Lives of the Women Killed by Jack the Ripper, by Hallie Rubenhold. The book provides a panoramic view of a social world we don’t often glimpse: late 19th century lower-class London. Bill and I (as Robin Paige) explored a possible connection between the Ripper and the Royals in Death at Whitechapel, so I have several reasons to be interested in Rubenhold’s book. I’ll be reviewing it on BookScapes in a few weeks.

And speaking of the Robin Paige mysteries, we’ve just signed the contract for the first three books to be published as audiobooks. If they do well, the rest of the series (a dozen books in all) will appear in audio. Happy about that!

Time to get to work this morning, but first, something personal from me to you: I have greatly enjoyed all of your notes and comments as we’ve moved from the old websites to the new. Thank you for being a reader. Thank you for being in touch. I appreciate each one of you.

Reading note. Show me a family of readers, and I will show you the people who move the world.
― Napoleon Bonaparte