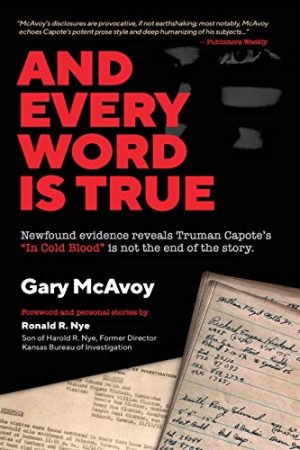 When In Cold Blood was published in 1965, Truman Capote’s book was a landmark, widely promoted as a factually true account of the 1959 murder of the Clutter family in a small town in Kansas, and of the investigation, the trial and appeals, and the execution of the two convicted killers. Capote (with his longtime friend Harper Lee acting as his research assistant) amassed over 8,000 pages of research notes and spent five years on the writing. Famously, he claimed that every word of his “nonfiction novel” was true.

The book was a huge literary and commercial success. Nobody disputed its importance as a striking achievement in a genre that had long been associated with the exaggerations and sensationalism of yellow journalism. But Capote’s claim to absolute truth was the target of quite a number of annoyed challenges over the years. Here is true crime writer Jack Olson: “I recognized it as a work of art, but I know fakery when I see it. Capote completely fabricated quotes and whole scenes . . . The book made something like $6 million in 1960’s money, and nobody wanted to discuss anything wrong with a money-maker like that in the publishing business.”

What is arguably “untrue” in Capote’s book is detailed in the riveting book, And Every Word Is True. Author Gary McAvoy (a dealer in collectible manuscripts) obtained access to the field notes of Harold Nye, the lead investigator for the Kansas Bureau of Investigation.  That the state of Kansas went to great legal lengths to retrieve and suppress the notes suggests that there may be more to the murders than a robbery gone wrong—and certainly more than Capote told us. McAvoy’s book gives us a great deal more factual information about the Clutter family and Mr. Clutter’s business and political dealings–information that doesn’t quite jibe with Capote’s constructions and suggests the possibility of other motives for the crime. The book also reveals a great deal more about the investigation itself, about Capote’s role in it, and about the investigators’ shaping of Capote’s research. It seems clear that the Clutter murder case that is presented by Capote as “true” and “factual” was heavily influenced by the KBI, to make sure that the story Capote was telling would match the KBI’s story of the crime. “[A] case could be made,” McAvoy says, “that In Cold Blood was as much a product of the KBI’s guiding hand as it was Capote’s flowing pen.” He makes a very strong case.

As you probably know, I like books about books and writers, books that give us a glimpse into the backstories behind the stories and story-tellers we admire. While McAvoy’s book could have benefited from editorial help, it is a meticulously-researched commentary that sheds a new and different light on a work that many consider the best of its genre. On its own merits, And Every Word Is True also stands as a fine true crime: compelling, engaging, detailed, and documented. If you’re a fan of In Cold Blood, you’ll want to read this.

7 comments on “BookScapes: Review of And Every Word Is True”