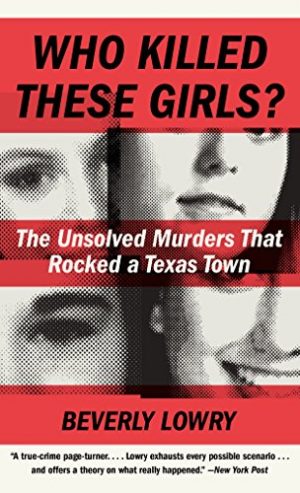 For me, Beverly Lowry’s book about the Austin TX Yogurt Shop murders ranks right up there with Truman Capote’s classic In Cold Blood as among the very best of true crime. But you have to be patient, for the story world Lowry recreates is initially–and deliberately, artfully, confoundingly–as confusing as the real world she must represent. And every bit as ugly, too. So you’d better bring a strong stomach to this book, as well as patience. There is nothing pretty about it, on any level, in any dimension.

The brutal 1991 murders of four young girls remain unsolved to this day. In this book, begun in 2009 and published in 2016, Lowry takes us through the labyrinthine case, from the grisly discovery through the exhausting (and botched) investigations to the arrests of four young men, the convictions of two, and the reversals of those convictions. In the seven long years of research and writing, she grew intimate enough with the families to be able to show us the exhausting effects of decades of grief and uncertainty; close enough to the cops to see (and reveal) their compulsive need to “solve” this case; and near enough to the politics of the judicial system to show its existential and terrifying failures. This is the best we can do in this world, Lowry says. Live with it. We have no other choice.

Factual, objective yet compassionate, eloquently voiced, Who Killed These Girls offers us everything we can ask from true crime. It is tragedy in the truest, most classical sense, and masterful. It illuminates, reflects on, and requires us to think about the issues posed by the awful appeal of true crime as a genre: why we want it, why we need it, why it hurts.

At the same time–and in the same way as the crime itself and its investigation–the book is baffling, demanding, frustrating, and profoundly disheartening. Readers who want their true crimes solved by competent police, criminals brought to justice, and society restored to a moral balance will not enjoy this book. Readers who can tolerate uncertainty, ambiguity, ambivalence, and real-world disorder–and who are able to appreciate an author who can represent all of this chaos with grace and compassion–will be rewarded with new insights into our very human frailties.

19 comments on “BookScapes: Review of WHO KILLED THESE GIRLS? by Beverly Lowry”