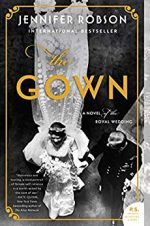 Jennifer Robson has chosen a winning subject for her fifth novel, a story about the creation of Princess Elizabeth’s wedding gown and the transformative role it plays in the lives of three women: Ann Hughes, an embroiderer in the London workroom of designer Norman Hartnell; Ann’s co-worker, Miriam Dassin, a French emigre and Holocaust survivor; and Ann’s Canadian granddaughter, Heather who is bequeathed Ann’s box of embroidered flowers and, cut loose from her job, sets out on a quest to understand their significance to her grandmother and herself.

Deftly told in a braided narrative, the story moves among these three women. The central story–the creation of the gown and its real and symbolic importance to bleak post-war London–anchors the book’s first part and Heather’s discoveries the second. Robson ably captures the spirit of the British as they face the difficult task of putting their lives together after the war:

“Just keep your chin up, Ann, and you can face anything,” Mum had said. “And don’t look back, no matter what you do.” Her mum had never been one for hugs or soft words, but she had been honest, and most of the time she’d been right, too. So chin up it was, and no looking back.

She also captures the difficulty of the work, as challenging as that of any of the old masters’ paintings:

The satin for the appliqué pieces was slippery, frayed all too readily, and couldn’t be basted or pinned for fear of leaving marks. Then, once applied, each appliqué had to be decorated with an eye-watering variety of embellishments. And they had to set each stitch with the knowledge that the reverse of their work might be clearly seen by anyone, for the train was transparent, and any sort of additional backing to the reverse of the appliquéd pieces would strain the delicate tulle.

While the plot may sometimes seem a bit serendipitous, that’s life, isn’t it? Or rather, that’s the quest story: full of twists of fate and pleasing surprises that seem to have been put together by some master designer. Altogether, The Gown is a satisfying novel, especially for those of us who are fascinated by fabrics and the way they are woven into the warp and weft of our lives.

Bonus #1: Go here for Jennifer Robson’s informative Time Magazine article on the making of the gown, plus photos of the gown and the royal wedding.

Bonus #2: Consider this novel together with The Pink Suit, by Nicole Mary Kelby.

11 comments on “BookScapes: The Gown”