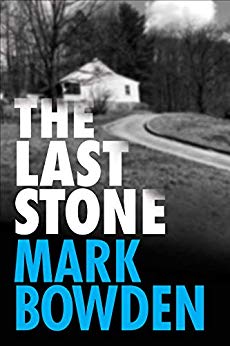 I write crime fiction, so I read a lot of true crime. I often find the genre difficult, but it’s fascinating at the same time, especially as it has evolved over the last couple of decades. Recently, one of my author colleagues (Leia Francisco) made a distinction between “liking” a book and “appreciating” it. We both agreed that Mark Bowden’s The Last Stone isn’t a book we “like.” The story is harrowing, the criminal hateful, the crimes unthinkable, the final justice questionable.

But as writers, we appreciate the research, the commitment, and the craft that went into both the book and the lengthy, dogged, intelligent, and often creative investigation it portrays. Mark Bowden is an experienced journalist with a long list of publications (including the book Black Hawk Down, which became an Academy-award-winning movie), and his experience stood him in good stead with this project. An earlier version of the book bore the subtitle A Masterpiece of Criminal Investigation. It is.

Review of The Last Stone, by Mark Bowden

This report of the eventual conviction of the man responsible for the kidnapping, rape, and murder of two young girls from a Maryland shopping  mall in 1975 focuses on the patient, determined work of a team of detectives who used all the tools at their disposal, including lying, to coax a confession out of a pathological liar. In this paragraph, Mark Bowden puts his finger on the challenge of investigating–and writing about–a 40-year-old cold case:

To discern the truth, an investigator (or a writer) must interpret testimony. You begin by asking basic questions: Who? What? Where? When? How? Why? The answers are then assembled into a narrative, an orderly progression of time, cause, and effect. And yet, anyone who investigates crimes, or who writes true stories, knows how untidy the process is and how readily such stories can break down. Often there are too many causes and too many effects to completely sort out. Human motivation is too hard to pin down, pieces refuse to fit, and memories notoriously differ.

Add the passage of decades and the problem gets harder. Much of the book consists of Bowden’s report of the 70-some hours of the detectives’ dogged interrogations of Lloyd Welch and the numerous narratives he fabricated in an attempt to avoid the truth. I was fascinated by Bowden’s extensive use of actual dialogue (reproduced from the recorded/videotaped interviews), and the detectives’ improvisational counter-narratives that led Welch ever deeper into the truth. Some readers may think there’s too much dialogue, but to me, it was all necessary, for solving this crime depended on the detectives’ reading of Welch’s multiple narratives. Their interrogations were the equivalent of the excavation of layers upon layers of a very old, very complex physical crime scene. And even then, we don’t get down to the truth, for as Bowden writes, what we get in a “true story,” is at best “artful, informed, honest speculation. At bottom, this is what we call history.”

The Last Stone is also the story of the appalling, despicable murders of two young girls and the culture of callous female victimization that produced it. I read it after reading (and reviewing) Sarah Weinman’s excellent book, The Real Lolita: The Kidnapping of Sally Horner and the Novel that Scandalized the World, which is about Vladimir’s Nabokov’s sordid recasting of a similar, earlier crime. The Last Stone is the story Nabokov should have told. Both these books take on a painful significance in the context of Jeffrey Epstein’s rearrest on charges of child sex trafficking.

Books like these are hard to read, because they show us an ugly, hateful part of our world that we prefer not to see. Which makes them, unfortunately, all that more important.

9 comments on “BookScapes: The Last Stone”