Lives change, as I said in my previous post on this continuing thread. (If you haven’t read this, you might want to skip over there and see where this blog series begins.) 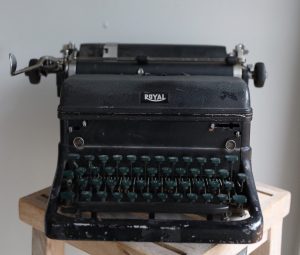 Yes. Lives change. I was a stay-at-home mom and a freelance kids’ fiction writer from the late 1950s into the early ’60s, living in a little house outside of Danville, IL. When my husband took a job at the News-Gazette in Champaign, we moved there. I decided to take one or two courses at the university and somehow turned into a full-time student with a major in English and a minor in Russian, of all things. (Full disclosure: I got in the wrong line at registration, wound up in a Russian class, and loved it.)

Over the next couple of years, as I took more English lit courses and typed dozens of papers a semester, my idea of a career changed. I wouldn’t be a mom/writer when I grew up. I’d be a mom/college-English-teacher. Which meant grad school, which meant another move, this time to UC Berkeley–luckily, on a Danforth fellowship that generously paid my out-of-state tuition and living expenses. (And I do mean serious luck. The fellowship had previously been available only to men. I was among the first group of Danforth women since the 1930’s.

For this twenty-something who grew up on a tenant farm, Berkeley in the late ’60s was a mind-expanding experience. Really. Can you imagine? The Haight-Ashbury, flowers in your hair, miniskirts and boots, Beat poetry, the Jefferson airplanes, anti-war protests. I loved it all, and especially the intellectual life. Libraries, classrooms, coffee shops on Telegraph, bookstores, books, books, and more books. 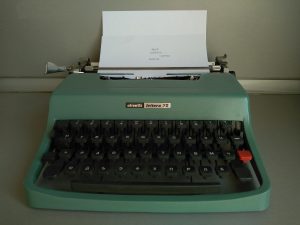 Grad school meant more papers. I traded the clunky old Royal for a portable Olivetti that allowed me to type faster and stop worrying about carpal tunnel. It might have been a mini machine, but oh, it was mighty. Typing faster produced more mistakes, but by that time, smart people had invented both correction tape and correction fluid (you could get high sniffing that stuff). I wrote constantly, and read when I wasn’t writing.  The kids and I (there had been a divorce) tucked ourselves happily into a 600-square-foot apartment in the graduate village, near the San Francisco Bay. When the windows were open, we could hear foghorns off Alcatraz and Angel Island. We could also hear our neighbors’ typewriters and smell their rich Korean and African and Jewish cooking. The children’s friends spoke a polyglot variety of languages. The costumes and customs of the village residents were magically diverse.

As was Berkeley. The University Avenue bus took me up the hill to the campus and the astonishing Cody’s Books and  Caffè Med on Telegraph, where you could always find a pot of hot Earl Grey and a Scrabble game in progress.  West on Shattuck was the new Chez Panisse, just opened by Alice Waters. The Albatross (the oldest pub in Berkeley), was only a few blocks away from the graduate village, and I hung out with friends there when I could afford a sitter. I picked up part-time teaching at the University of San Francisco so I would have something to enter under “employment” on my vita. The kids and I hiked in the hills on Saturdays. I learned to sail and spent Sundays on the water. I settled on some forgotten 12th- and 13th-century manuscripts for a dissertation topic, honed my research skills, and dug in to write the blasted thing. I loved it all. I loved everything. I didn’t want to leave.

But yes. Lives change, and I couldn’t loiter in grad school forever. I began looking for a job, and by the time I finished typing the dissertation (produced through many revisions and multiple drafts on that sweet little Olivetti), I had one. It was a difficult era, nationally, and college teaching jobs were scarce as hens’ teeth. Scarcer, really. I felt lucky to land at the University of Texas at Austin. We moved there and I started a teaching-administrative career that took me through the next dozen years.

I kept on writing, of course. The dissertation became a book, amazingly still available. I partnered on a translation of an important Russian literary study. I wrote lots of articles: the kind of thing academic writers write for about a dozen other academics to read. (The more detailed your research, the smaller your audience.) 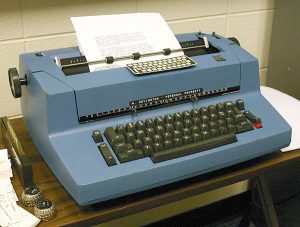 By that time, I had ditched the Olivetti for the best typewriter I ever owned, an IBM Selectric. Remember that model? It had interchangeable font balls, a correcting tape, and a simply magical keyboard touch. I adored it. On it, I produced three books, a bundle of articles, and course syllabi, notes to students, and letters to colleagues across the country. (Remember letters? Those things we used to write to friends before email?)

And yes. Lives keep on changing, and then change again.  After a couple of decades spent writing all that academic stuff, I lost my enthusiasm for it. I was impatient with faculty and university politics, and teaching wasn’t as much fun as it had been. I began to think nostalgically about the pleasures of writing fiction and working at home. About the possibility of writing (instead of teaching) for a living. That had been an option back in the days when I was freelancing, hadn’t it? Was it possible now?

It’s a cliché to say that there was only one way to find out. But there was. Only one. I went for it.

And we’ll get into that later.

53 comments on “My Life in Typewriters: On Becoming a Writer 2”