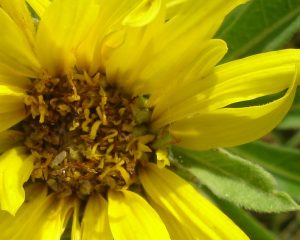 Every year, the sunflowers bloom along our lane, as dependable as the sun itself. This native sunflower is Helianthus annuus–native, that is, to the Americas, although it has now traveled around the planet.

The Americans who were here before us used every part of the sunflower. They roasted the seeds and ate them. They brewed a tea from the flowers to treat pulmonary ailments, malaria, and fevers. They made leaf and flower poultices to treat burns. They chewed the crushed root and applied it to snake and spider bites and blisters. They believed it was a powerful aphrodisiac, as well. No wonder they carried it with them. No wonder it went wherever they went.

And when the Spanish came to the Americas in the 1500s, the sunflower went with them back to Spain. There, the edible seeds and the oil became an immediate hit. And from there, everywhere.

Contemporary times, contemporary uses. Sunflower seed oil is a valuable commodity. The seeds are fed to livestock and birds. The plant is a source of latex and can be used to produce rubber.

But I love it because it’s beautiful, and because (unlike me) it stands up to the sun on the very hottest days. That’s more than enough, don’t you think?

Book Report. Out of BODY, the third episode in Ruby’s Crystal Cave trilogy, featured investigative reporter Jessica Nelson. She was also a major character in Mourning Gloria and has appeared in several other of China’s mysteries. I’ve been thinking for a while that Jessica, editor Hark Hibler, and the rest of the staff at the Pecan Springs Enterprise ought to have their own stories. It’s timely, because (as you probably know) local newspapers are a threatened species, and Pecan Springs must not become a “news desert,” like so many small towns. I’m almost finished with Jessica’s first novella, called Dead Lines. Not sure about the publication date—maybe late the year or early next.

Many of you have asked about print editions of Ruby’s novellas. I’m  happy to let you know that the omnibus edition (all 3 novellas in one book) will be available in a couple of months. I checked the new cover and the page proofs last week. I’ll let you know when it’s up for pre-sale.

Reading Note; Were it left to me to decide whether we should have a government without newspapers or newspapers without a government, I should not hesitate a moment to prefer the latter.—Thomas Jefferson (who held often conflicting views about newspapers)

20 comments on “Sunflowers: In Bloom This Week”