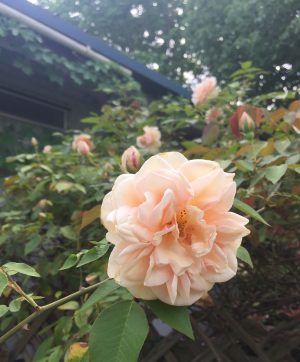 The antique rose on the trellis beside the deck is having a stellar spring. I lost my rose plant list long ago and I can’t remember the name of this one, so I just enjoy the sight and the scent (it’s remarkably fragrant). The temperature has set records already, we’ve had some rain, and everything is green, green, green. Except for the bluebonnets, of course–there are plenty of them, turning the fields and meadows blue.

Plenty of Indian paintbrush, too. The vibrant red, orange, or yellow “flowers” are really leaves, like poinsettia “blossoms”–botanically speaking, they’re “bracts.” And as a special bonus, they’re edible. They make a pretty (and somewhat spicy) addition to a salad. 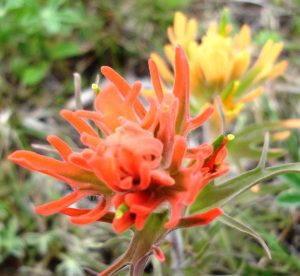 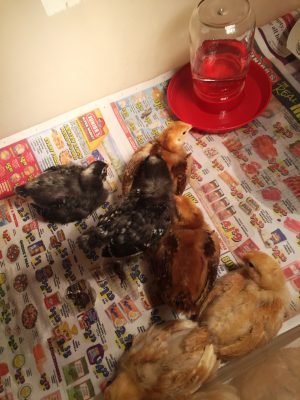 And of course, it wouldn’t be spring at Meadow Knoll if we didn’t have baby chicks.

This little flock of pullets is mixed: bottom right, two Buff Orpingtons; top left, two Barred Rocks; center, two Rhode Island Reds. They came from a local feed store, so they were a couple of weeks old when I got them. All three breeds are reliable layers; these little girls will begin their egg-producing careers in about six months. Until then, all they have to do is eat, sleep, and hang out with their friends. They’ll spend the next couple of weeks in a large plastic bin in the bathtub and then move out to the coop to join the elderly hens already in residence. Such fun to watch–and the little Barred Rocks can already fly! I’ve had to put a piece of screen wire over the tub to discourage their flight adventures.

Book report. A lot going on! The first book in the Crystal Cave novella trilogy (NoBODY) will be out next week; the second in mid-May; the third in mid-June. I had some unexpected–and happy–news last week: the trilogy will appear in audio, as well, beginning in August. The paperback edition (if there is one) will be along later. This is Ruby Wilcox’s first solo outing, so both she and I are excited about it. It’s different–we hope you like it.

And A Plain Vanilla Murder will be published on June 4, in print, digital, and audio. This is China’s 27th mystery–hard to believe! The 28th–Hemlock–is in the works, along with another novella project. (I like the shorter form and the ease of digital publication.) I’m traveling much less this year, which gives me more time for writing.

Reading. I’ve just finished Anthony Horowitz’s inventive mystery, The Word is Murder (and have already pre-ordered the sequel, The Sentence Is Death). As a reader, I loved it. As a writer, I admired the creative ways Horowitz tweaked the mystery formula. In the book, Horowitz (you may know him as the creator of Foyle’s War and the author of a wildly popular YA series) plays Watson to a Sherlock-like detective named Hawthorn. Hawthorn is attempting to solve the crime; Horowitz is documenting his efforts for a true-crime book he has reluctantly agreed to write.

Throughout, Horowitz (in his double persona as both author and character/narrator) offers meta-commentary. This, for instance: “If I were in control of events I would have introduced the killer by now but I wasn’t at all certain that we had met anyone yet who fitted the bill.”

This is laughably false, of course: as the author, Horowitz has entire control of events. But he has cleverly cast himself as a clueless narrator who is baffled by everything that happens. If you like cerebral mysteries, now-you-see-it-now-you-don’t shell games, and plays on words (i.e. “lacerating” and Laertes, which every spellcheck victim will understand), this one is for you.

Reading note. Narrator Horowitz to Detective Hawthorn, discouraging him from an early identification of the villain: “They’re not called murder victim stories. They’re not called criminal stories. They’re called detective stories. There’s a reason for that. I’m taking a big risk here. If you solve this crime right now, I won’t have anything to write about. Worse than that, if you don’t solve it at all, it’ll be a complete waste of time.”

2 comments on “The Antique Rose”