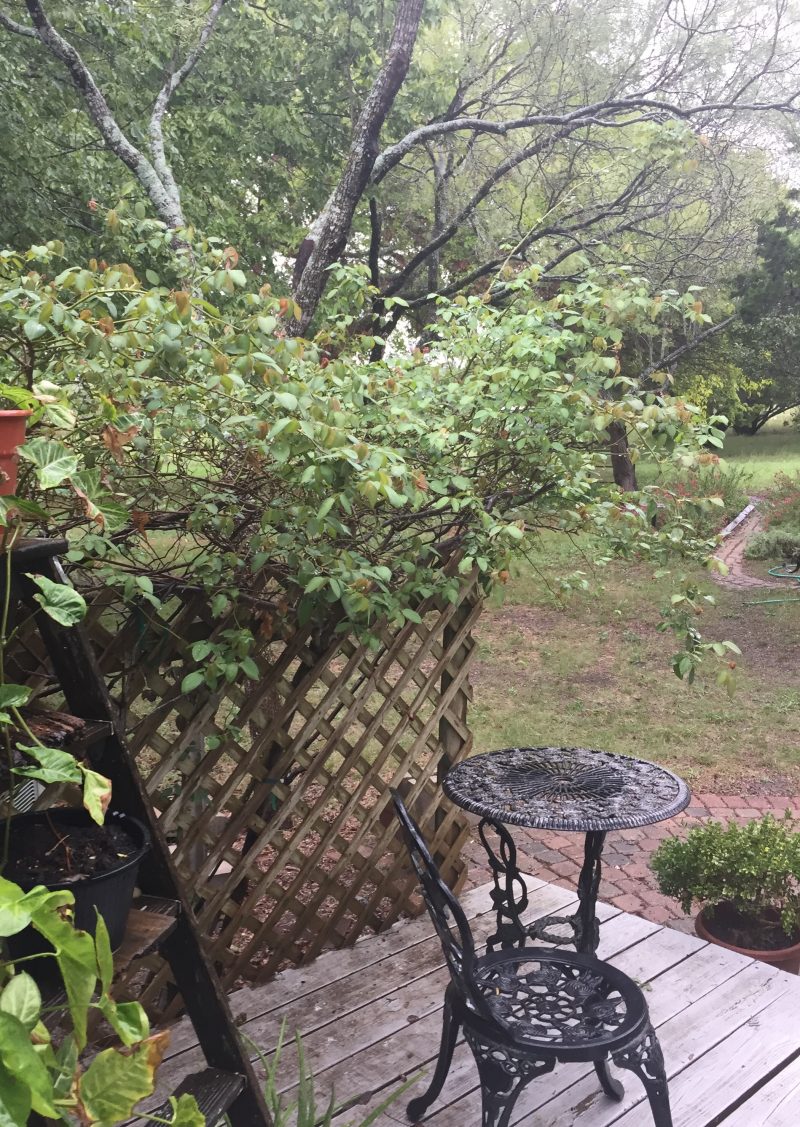 This rose bush doesn’t look like much–only a flurry of unremarkable green leaves. But just two weeks ago, it was a mass of leafless brown sticks. This was a first, for over the 25 years of its life, this resilient New Dawn had never lost its green leaves until after December’s killing frosts.

But August’s string of 30+ days of 100+ temps was too much for it, and I hadn’t been much help. It was a long, brutal Covid-fueled summer, and I didn’t recognize the danger until Labor Day. I suddenly saw that the rose was leafless and brown. My inattention had killed it. I felt terrible. That rose was as hardy as they come. I count on its lush greeness to fill an important place at the end of the deck. How had I been so negligent, so inattentive, so care/less?

But then, last weekend, tropical storm Beta blew in off the Gulf, dumping a deluge of flooding rain on the Coastal Bend and the rest of the Southeast. At least two people died and the damage will likely be in the billions. Here in the Hill Country, 200 miles inland, we got barely an inch over a couple of days, but it came with a blessed cool-down. And just a day or two after Beta had spiraled off to the northeast, the New Dawn put out a sudden flush of eager green leaves. The bush has been seriously damaged, I’m sure, but its revival felt like a miracle. It was a miracle, far as I was concerned.

Nature is always teaching us something. The rose reminds me that the world we know and love is bravely resilient–but also frighteningly vulnerable. Beta is another demonstration of the truth that what’s damaging, even deadly for some can be beneficial, even hope-filled, for others. The episode warns me that I need to be more attentive, less negligent. I must care more, be more watchful.

And I have to learn that I can’t count on miracles. The term “Beta” tells me that it’s already been a very long hurricane season–and there are still two more months (and another alphabet) to go. The disastrous  fires on the West Coast remind me that climate change can be irrevocable.The designation “Covid-19” carries the warning that there can be a Covid-21 or -22, with even more dire impacts, while the chaos and incompetence in the White House has given us no protection against this storm and others–and now threatens to wreck our hard-won health care and the crucial impartiality of our judicial system.

But back to roses and storms. I’m grateful to West Coast friends Christina Baldwin and Ann Linnea, who recently wrote this in their Peer Sprit newsletter: “The smoke was an event. The fires are a disaster. What we’re living through is a transformation. It’s not going to ‘get over with’ and return us to the old status quo. Like a burned forest, life will return— but it will not be the same forest. We are in it now, the big turn, the long work, the unraveling and reweaving. Whenever you can, take a deep breath.”

I’m taking a deep breath. Not the same forest, no. The big turn and the long work, yes. Bill and I are both over 65, so in Texas, we can both legally vote by mail, whether Trump likes it or not. Our ballots arrived yesterday; we will be returning them next week. We’re voting for Joe Biden and Kamala Harris.

Your comments and thoughts are welcome as always. Trolls are not.

Update 9/28: Snarky troll remarks will not be published, so don’t bother.

83 comments on “The New Dawn, Beta, and a Deep Breath”