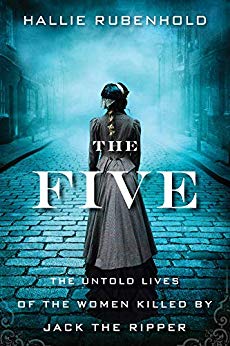 xceptional research underpins this riveting study of the five victims of Jack the Ripper. These are well-told stories of women’s lives in mid-to-late 1800s, converging in the Whitechapel slums of London in the summer and early autumn of 1888.

Rubenhold’s book is a much-needed corrective, staying away from the murderer and the murders but focusing deeply and extensively on each of the five victims and using the five to create a panoramic understanding of the lives of lower-class women during the years of Victoria’s reign: where they began, how they lived and worked, and why they came to Whitechapel and their deaths.

Rubenhold confronts and refutes the long-held view that all of the victims were prostitutes and that their sex work was responsible for their brutal murders. She demonstrates that these women were homeless and destitute, often because they could not or would not conform to Victorian expectations of women as wives and mothers. Therefore, they (like nonconforming women of our own day) were seen to have “deserved” what they got. Rubenhold writes:

When a woman steps out of line and contravenes accepted norms of feminine behavior, whether on social media or on the Victorian street, there is a tacit understanding that someone must put her back in her place.

That someone is the Ripper, “the unfathomable, invincible male killer” who personifies the social belief that out-of-bounds women who can’t or won’t do as they’re told must be destroyed. It is only through understanding that we can confront and change this destructive view, Rubenhold says, and return the victims to their full humanity:

It is only by bringing these women back to life that we can silence the Ripper and what he represents. By permitting them to speak, by attempting to understand their experiences and see their humanity, we can restore to them the respect and compassion to which they are entitled.

This book was specially interesting to me, because I used some of the same sources in Death at Whitechapel and Death at Glamis Castle, two of the novels that Bill and I wrote as Robin Paige more than 15 years ago. If we had had access to Rubenhold’s fascinating research on the real Mary Kelly, our fictional character would have been very different–and far more interesting. Our basic plot would have been the same, but Mary Kelly would have had her own distinctive life, much more complicated than the one we gave her. Her death would have been more significant, and Kate Sheridan’s understanding of it (Kate is one of the series protagonists) would have been richer and deeper.

I have read almost all of the books written about the Ripper, most of which are highly speculative and based on hunches, guesswork, and the sensational reportage that appeared in the British press of the day. The Five is the most factual, most comprehensive, and (in my view) the best. Kudos to Rubenhold for pulling our attention from the criminal to the victims and making them real.

8 comments on “BookScapes: Review of THE FIVE, by Hallie Rubenhold”