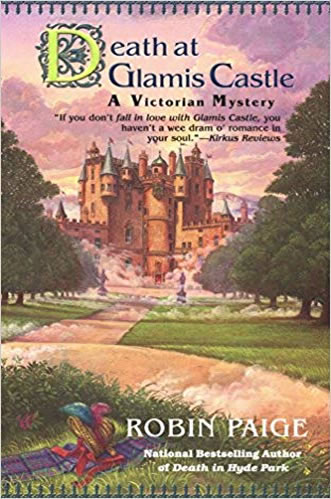 “Gypsy prophecies, singalongs at the pub, a possible ghost or two: There’s something for everyone. And if you don’t fall in love with Glamis Castle, you haven’t a wee dram o’ romance in your soul.”
—Kirkus Reviews

Charles and Kate are summoned to Scotland on a mysterious errand for the Crown.

Upon their arrival, they discover that they will be staying at Glamis Castle, the most historic castle in Scotland, a place haunted by shadows and dark secrets. They learn that Prince Eddy, who had been heir to the throne until his supposed death in 1892, is still alive. He has been imprisoned at Glamis for the past ten years.

Only now the prince has gone missing–on the very morning that the body of one of his servants was found, her throat slashed.

And now, Charles and his clever Kate must find Eddy and clear him from suspicion of murder, while keeping his true identity a secret.

“Gypsy prophecies, singalongs at the pub, a possible ghost or two: There’s something for everyone. And if you don’t fall in love with Glamis Castle, you haven’t a wee dram o’ romance in your soul.”
—Kirkus Reviews

“Robin Paige has written an excellent mystery that involves German spies, a dark conspiracy, and a servant who is loyal and devoted to a once crowned prince. This work is rich in atmosphere and gives the audience a feel for the period after Queen Victoria’s death.”
—Harriet Klausner

If you’d like to learn more about this historic castle, the setting for Kate and Charles’s most recent adventure, click here.

For more about the famous Glamis ghosts, go here.

For information about Glamis Village and a few pictures, look here.