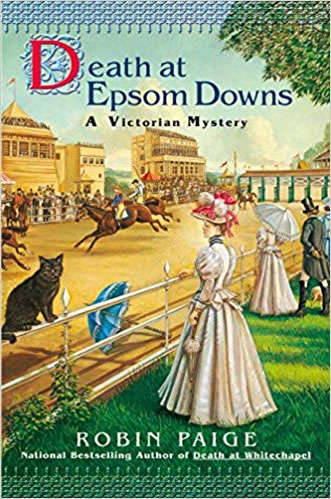 “Well researched, Death at Epsom Downs takes an intriguing look at late Victorian high society. The interplay between Charles and Kate is always a delight to read, and the Jersey Lily will fascinate readers.”
—Romantic Times Magazine

In this seventh late-Victorian mystery, Robin Paige (the writing team of Susan and Bill Albert) provides a neatly plotted tale of mayhem among the racing set.

It’s time for the Derby at Epsom Downs, and Lord Charles Sheridan and his American-born wife, Kate, are on hand because the Jockey Club has asked Lord Charles to use his new automatic camera to photograph the finish of the race. Disaster strikes when a jockey is killed on the racecourse, and race officials suspect his horse may have been doped. Though the practice of doping horses is not yet illegal, officials are nevertheless worried about the death’s effects on betting and the presence of an American gambling ring with expertise in doping. The murder of bookie Alfred (Badger) Day makes it clear that doping isn’t the only crime that must be solved.

While Charles is occupied with these matters, Kate (doing research for a new book) is visiting with Lillie Langtry, racehorse owner, glamorous actress, and charming companion to His Royal Highness, Bertie, the Prince of Wales. Amid the excitement of the race, the Jersey Lily’s jewels have been stolen. Can the theft be connected to Day’s murder?

Kate and Charles delve into the mysteries and, as usual, find the answer in another “clever, richly detailed whodunit” (Publishers Weekly).

“A neatly-plotted tale of mayhem among the racing set…a clever, richly-detailed whodunit. Readers who like their historical mysteries on the lighter side will find much to enjoy here.”
—Publishers Weekly

For a quick but accurate overview of the life of Lillie Langtry (and a discussion of her racing interests), check out this Wikipedia article.

For a behind-the-scenes look at British racetrack scandals (several involving the Royals), read The Fast Set: The World of Edwardian Racing, by George Plumptre.