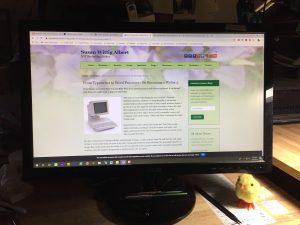 , I’ve always loved research even more than writing. Which is a curse, really.

I have a problem with that. It’s my problem, of course. There is absolutely nothing wrong with–in fact, there are all kinds of things right with–writing out of the imagination. The best fantasy gets written that way. Neil Gaimon, for example. Steven King. Margaret Atwood. JK Rowling. L. Frank Baum (remember the Oz books?).

But I am a fact-based writer. I love nothing more than to take real-life events, real things, and real people, and stir them into stories. I love the edgy interface between what’s “true” and what’s made-up.  I covet the confusion and uncertainty that bubbles up when what’s real intrudes on make-believe. To me, the real thing makes the fiction more lifelike; the fiction reminds me that what we naively believe to be real is really a story, too.

So when I started writing the China Bayles mysteries, I based them on several Texas towns that I knew, on real plants, on real people and events. When Bill and I began the Robin Paige mysteries, set in Victorian/Edwardian England, we wrote about real people (Conan Doyle, Rudyard Kipling, Jack London, Lily Langtry, Jennie and Winston Churchill) who had done real things, embedded in stories about a pair of fictional sleuths. I pushed this even further with Beatrix Potter’s Cottage Tales,  mixing Miss Potter’s actual life in the village of Near Sawrey with fantasy animals, hers (which she also turned into stories) and mine. And so with the Dahlias, too: a real era (the 30s) featuring real-life events. And especially with biographical fiction: Rose and Laura, Hick and Eleanor, Kay and Ike. All of which, of course, requires diving deep into the actual weeds of real-world stuff.

In the 1990s, this meant day-long trips to Austin (120 miles round trip) to the library–usually the University of Texas library. Shopping bags and briefcases full of books, going and coming. Tons of books. Acres of books.

And then the internet arrived.

But not that fast. It inched along, slower than a slug on a leaf, with no place to go and in no hurry to get there.

In 1997 , the internet finally came to our rural corner of the Texas Hill Country via a tenuous landline connected to a tiny server in a small town about 30 miles away. This dial-up service was intermittent, hesitant, recalcitrant, often totally nonexistent. (For us, www literally meant: the world-wide wait.)But I was hungry enough for the internet’s resources to wait (and besides, it beat driving to Austin). And things gradually improved, both in terms of internet speed and in the kinds of online research material I was able to find. In 2008, ten years after our first dial-up, we found a satellite service called WildBlue and installed a dish on the roof, and from then on, the situation improved exponentially. Every year, the speed has increased and tons of new research material appears on the internet daily.

A few examples. In 2004, we went to Scotland to research Death At Glamis Castle, near the tiny village of Glamis. We snapped dozens of photos and videos, bought guidebooks, looked at maps. Came home and found–on the internet–that the village had a one of those 24-hour village cameras. We could see the houses, the people, the weather. Amazing. Oh, and Bill wanted a bicycle for use in that book. He found it on Wikipedia: the Pederson folding bicycle, which was used during the Boer War.

For the 8-year Cottage Tale project, Bill and I spent weeks in England’s Lake District, where I learned as much as I could. Back home, I used Google Earth to picture the settings, dug up the names of plants and animals from research sites online, and found timelines of real events. Just one example: I discovered by accident that Winston Churchill came to Lake Windemere in November, 1911, to test out the seaplane ‘Waterbird.’ I used it in The Tale of Oat Cake Crag   to the scorn of a fanciful dragon who resented the intrusion of Churchill’s flying machine on his lake.

The Dahlias and I love to turn up interesting regional foods and food history. I spend a lot of time browsing food ads from the 1930s, like this one, from the June, 1935 issue of the Anniston AL Star. Wow. Just look at those prices! And if I want to feature a real recipe from a real restaurant (say, Lindy’s cheesecake, from the legendary Lindy’s on Broadway in NYC, where Hick used to hang out), I can find it on Foodtimeline.org, along with all kinds of fascinating stuff about Lindy’s and cheesecakes–and much, much more.

And of course, there are the biographical novels. Each one has presented its own particular challenges. I especially loved following Kay Summersby’s post-war life through the pages of 1950s and 60s newspapers and magazines. (That was original research that no one had done before.) I used the internet to piece together Lorena Hickok’s personal history  and her writings, after she left her hideaway on the third floor of the Roosevelt White House in 1944. And Rose Wilder Lane left an internet trail for me to follow as I dug into her foreign travels in the 1920s. For each of these projects, I collected photos that informed and inspired me from all over the internet and assembled them on Pinterest boards (posted on the website’s book pages).

My writing has changed over the 20+ years that I’ve had access to the astonishing trove of treasures on the internet. It’s become less derivative (that is, less dependent on books that others have written), more detailed, more informative, and (I hope) more true to the real world we all inhabit. Every day, I’m amazed by what’s available on the internet for us. All we need is a lot of curiosity, a little patience, and some research skills. And a willingness to learn.

And the internet gives us an amazing place to share what we learn with friends and family and other curious people.

21 comments on “Adventures in Research: Becoming a Writer 4”