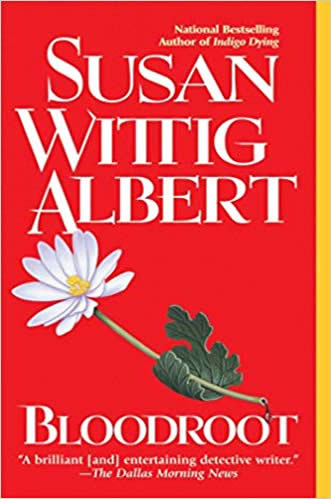 “The latest in the popular series takes [China Bayles] into completely new territory, both geographically and emotionally. . . [Readers will appreciate]  Albert’s clear love of her subject matter, smooth styling and rich marbling of past and present.”
—Publishers Weekly

Jordan’s Crossing….Just the thought of her family’s Mississippi plantation is enough to set China Bayles adrift on a sea of memories. The sweet perfume of magnolia blossoms mixed with the hot, heady smells of the swamp. The house, perched on the banks of the Bloodroot River, a trenchant reminder of the bitterest, bloodiest moments in the country’s history. And the secrets. The shameful, stifling secrets that have kept her away for so long….

Bloodroot takes China to a place where her family’s legacy of silence is broken at last, and the past finally, unforgettably, speaks the truth.

“Many wild flowers which we have transplanted to our gardens are full of magic and charm, while others are full of mystery. In childhood, I absolutely abhorred Bloodroot; it seemed to me a fearsome thing. I remember well my dismay, it was so pure, so sleek, so innocent of face, yet bleeding at a touch, like a murdered man in the Blood Ordeal.”Alice Morse Earle, Old Time Gardens, 1901

According to Native American Ethnobotany, by Daniel E. Moerman, the Ponca Indians of South Dakota and Nebraska used bloodroot as a love charm, rubbing the juice on the palm of a young bachelor. The Micman Indians (Nova Scotia, Prince Edward Island, and New Brunswick) used the same plant both as an aphrodisiac and as an abortifacient. The Iroquois employed it as ceremonial witchcraft medicine, believing that the smoke from the burning plant could cleanse someone who had seen a ghost.

“Packed with an intriguing family legacy, delicious recipes, quirky characters and dynamic dialogue, BLOODROOT may be the first Susan Wittig Albert book I have discovered, but certainly not my last!”
—Tracy Farnsworth, The Romance Readers Connection

“One of the best-written and well-plotted mysteries I’ve read in a long time.”
—Los Angeles Times

“A wonderful character…smart, real, and totally a woman of the nineties.”
—Mostly Murder

Preheat oven to 400 degrees. Sift the flour, baking powder, baking soda, salt, and sugar together in a large bowl. Cut the butter into pea-sized lumps in the flour mixture. Add rosemary and milk and mix with a fork to form a soft dough. (Do not overmix.) Roll out dough 1/2-inch thick on lightly floured board. Cut into circles with a biscuit cutter and place close together on a greased and floured baking sheet. Bake 20 minutes. Serve hot. Makes 12.