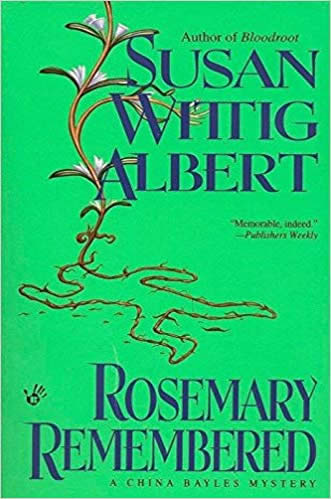 “Engrossing…China continues to appeal with her herbal information and savvy sleuthing.”
—Booklist

China discovers that business can be murder when she finds her accountant, Rosemary Robbins, dead — in the front seat of McQuaid’s truck! Rosemary and China are look-alikes. Was it a case of mistaken identity?

But with one abusive ex-husband and plenty of former clients in the picture, there’s no shortage of suspects. And with a vengeful ex-convict on the loose at the same time, there’s plenty for China to worry about. She has plenty of investigating to do, with the help of new friend Sheila and a New Age channeler of a spirit who calls herself Lo Que Sabe. But it is Ruby who comes up with the winning clue–on her Ouija board.

“Rosemary is for remembrance,” according to Shakespeare—and so it is, in more ways than one. Rosemary has been used for centuries to preserve everything from meat (it’s a tasty natural with lamb) to the human body (the Egyptians used it in embalming). Now, scientists are discovering that it may actually preserve memory, and are using it to treat Alzheimer’s patients! Brew up some rosemary tea, use it in meat and vegetable dishes, or try sniffing its memorable aroma.

“One of the best-written and well-plotted mysteries I’ve read in a long time.”
—L.A. Times