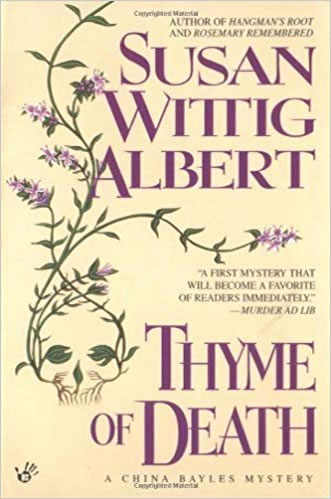 “A first mystery that will become a favorite of readers immediately.”
—Murder Ad Lib

Thyme & Seasons, China Bayles’ herb shop in Pecan Springs TX,  is a long way from her career as a criminal defense attorney in Houston.

But the sweet life turns sour when a friend is found dead (is it suicide? is it murder?) and China uncovers a stash of torrid love letters. Her investigation is aided and abetted by flamboyant redhead Ruby Wilcox, owner of the only New Age shop in Pecan Springs, and ex-cop boyfriend Mike McQuaid, now a professor of criminal justice at the local university.

Nominated for both an Agatha and an Anthony for Best First Mystery, Thyme of Death has become a perennial favorite of mystery readers, the launching point of a series that has continued, with annual releases, for over two decades.

Thyme is commonly found both in the kitchen and the medicine cabinet. It has been used for centuries to preserve and season food and as a cough remedy, a digestive aid, and an antiseptic. In the Middle Ages, the herb was thought to be an antidote against fear, while seventeenth-century herbalist Nicolas Culpeper believed it to be a “certain remedy for that troublesome complaint, the nightmare.”

Thyme served as a battlefield antibiotic during World War I, and in World War II, when the Russians could not obtain other antibiotics, they substituted thyme as “Russian penicillin.”

“Witty, sharp, and entirely her own woman.”
—Susan Dunlap

“A marvelous addition to the ranks of amateur detectives.”
—Linda Grant

In Pecan Springs, Texas, soup always seems to taste better in the winter—but this thymely soup is good hot or chilled. Serve it to 4-6.

Over low heat, saute the carrots and onion in the butter or margarine in a covered soup pot until soft, about 15 minutes. Add the stock and heat to a simmer. Add the bouquet garni and simmer 20 minutes. Take out the bouqet garni and puree the soup in two or three batches. Add half and half and reheat. Season to taste with salt, pepper, and nutmeg, and serve, garnished with chopped thyme and parsley. To serve cold, chill for several hours and garnish with a dollop of yogurt and the chopped herbs.