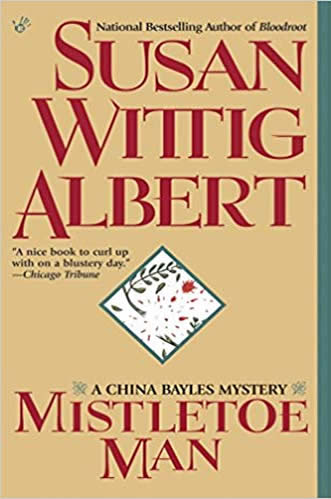 Former big-city lawyer China Bayles has worked hard to make her herb shop a success. Now business is booming at her newest venture, Thyme for Tea—but China is too distracted to enjoy this latest entrepreneurial triumph. It’s Christmas, and China has opened her home for the annual Pecan Springs Holiday Home Tour. But she’s also worrying about her friend and partner Ruby, who just hasn’t been herself lately. To further complicate matters, China has to round up a supply of mistletoe, the season’s most popular herb. It seems an easy enough task—until her chief supplier turns up dead. Compelling, suspenseful, and wholly original, Mistletoe Man tells the story of China’s search for justice—and of her struggle to reconcile the demands of her business with the desires of her heart.

Mistletoe is an herb that’s surrounded with traditions, most of which stem from the fact that this parasitic plant grows so differently than other herbs. (In fact, some people trace its name to the Old English word mistil, meaning different.) It grows on host trees, from seeds planted in the bark by the birds who feast on the white berries that ripen during the winter. Dating back to Druid days, mistletoe has been a part of Yule or winter solstice celebrations, and the “kiss of peace” that was once exchanged by warring clans under this special plant has now evolved into a Christmas kiss. The plant has been used in folk cultures to treat epilepsy; medicinally, it is used as a sedative and to slow a rapid heartbeat. Recent research suggests that it may also slow the growth of cancerous tumors, and it is being used in Germany to supplement chemotherapy. Mistletoe is not a culinary herb, but the berries are not poisonous, as is popularly believed. (Note: there are at least two quite different species of mistletoe, European and American. The cultural traditions that surround the European plant have been assimilated to the American plant, which does not have the same medicinal qualities of the European.)

“Mistletoe Man deals with new marriages, estranged friendships, and the mature knowledge that one person cannot save the world but can make it a bit better for everyone. The personal side enhances a fantastic mystery filled with curves that leave the reader guessing until the end, a trademark of Ms. Albert.”
—Harriet Klausner

“The pace is as peppy as a Texas two-step…Albert’s dialogue and characterizations put her in a class with lady sleuths V.I. Warshawski and Stephanie Plum… Throughout this intricately plotted and deliciously descriptive tale, China proves herself intelligent, independent, persistent and compassionate. This is a funny, human story that will give Albert’s admirers a ringing jingle bell romp.”
—Publisher’s Weekly

“Mystery lovers who also garden will be captivated by this unique series.”
—Seattle Post-Intelligencer

Your reading group might enjoy this recipe, which is perfect for a holiday (any holiday) treat:

This warm and cheering cranberry- and orange-flavored tea is a natural for Christmas Eve. The recipe makes 12 cups.

Combine allspice, cinnamon, and cloves with the water in a saucepan and bring to a rolling boil. Remove from heat and add tea bags. Cover and steep for about 5 minutes. Stir and strain. Strain a second time to clarify (a coffee filter is handy here). Add sugar and stir until dissolved. At serving time, stir in juices, pour into a glass or stainless steel pan and reheat to serving temperature. (Don’t boil)