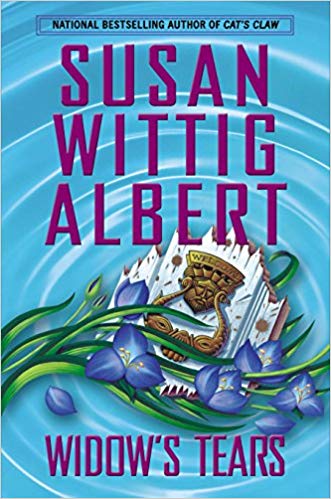 “Albert puts a personal face on the Galveston hurricane of 1900, which claimed the lives of thousands. She also seamlessly merges time periods—no easy task.”
—Romantic Times

In Widow’s Tears, a haunted house may hold the key to solving the murder of one of China’s friends.

After losing her husband, children, and beautiful home in the Galveston Hurricane of 1900, Rachel Blackwood built an exact replica of the house she lost. She later died there, still wrapped in her grief.

Now, Ruby’s friend Claire has inherited the Blackwood house and wants to turn it into a bed and breakfast. But she discovers that it’s haunted, so she calls Ruby—who has the gift of extrasensory perception—to encourage the ghost to leave.

While Ruby is ghost-hunting, China Bayles walks into a storm of trouble in nearby Pecan Springs. A half hour before she is to make her nightly deposit, the Pecan Springs bank is robbed and a teller is shot and killed. Before she can discover the identity of the killers, China follows Ruby to the Blackwood house to discuss urgent business. As she is drawn into the mystery of the haunted house, China opens the door on some very real danger. 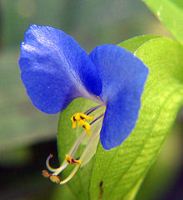 Widow’s tears is a name shared by two plant cousins in the family, Commelinaceae. These cousins also share another common name:  dayflower. Both are beloved by bees and other pollinators; both are invasive.

One of the plants called widow’s tears is found in the genus Commelina. Its showy flower is made up of two larger symmetrical petals above (usually blue—some people think they look like mouse ears) and a tiny white petal below. Around the world, Commelina is used as food, medicine, dyes, animal fodder, and in the production of paper.

The other widow’s tears (also called spiderwort) belongs to the genus Tradescantia, a New World native named for the sixteenth-century English naturalist John Tradescant. The blossoms range from pale pink and lavender to purple, and usually have three symmetrical petals. Spiderworts have been used for both food and medicine.

Widow’s tears flower in the morning and fade by day’s end. When you squeeze the bract that surrounds the flower stalk of a Commelina blossom, a drop of tear-like mucilaginous sap oozes out. Tradescantia flowers wilt into a fluid jelly. Some people are reminded of the tears of a truly grieving widow.or of a widow who is making a show of grief.

In the language of flowers, widow’s tears represent grief.

Albert puts a personal face on the Galveston hurricane of 1900, which claimed the lives of thousands. She also seamlessly merges time periods—no easy task.
—Romantic Times

Recipes from Thyme for Tea

Click above for the PDF, which includes a half-dozen recipes from China’s and Ruby’s tea room: Tomato Quiche with Basil and Green Onions, Rose Geranium Pound Cake with White Chocolate Glaze, and more. Yum! You may print or download and share with your book club or friends.