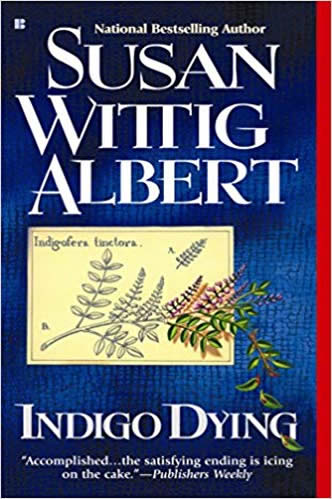 “A wonderful character…smart, real, and totally a woman of the nineties.”
—Mostly Murder

Indigo was once a thriving community, but times have been tough on this Texas town. Now, as artists flock to the countryside, Indigo is coming back to life, and China is committed to helping the Save Historic Indigo Committee resurrect it.

But the town’s new life–and the lifestyles of the bohemian entrepreneurs and older residents of the community–is put in jeopardy when Casey Ford, a reviled but powerful Indigo resident, concocts a plan to sell the coal-mining rights to a national conglomerate, a scheme that would allow him to evict most of the store owners in town once the deal is done. Ford is murdered days before he signs the agreement. China finds herself stymied in her investigation of the murder by a town full of suspects who close ranks as they celebrate Ford’s sudden death.

This is a town with dark secrets, and it takes the teamwork of China and Ruby to bring them to light.

“Albert’s characters are as real and as quirky as your next-door neighbor.”
—The Raleigh News & Observer

“Albert’s dialogue and characterizations put her in a class with lady sleuths V.I. Warshawski and Stephanie Plum.”
—Publishers Weekly

“I would rather wear my indigo wrapper than a rich red cloak that isn’t mine.”
—African proverb

“One drop of indigo is enough to turn a whole bowl of milk blue.”
—Japanese proverb

“Blue from indigo is bluer than the indigo plant.”
—Chinese saying