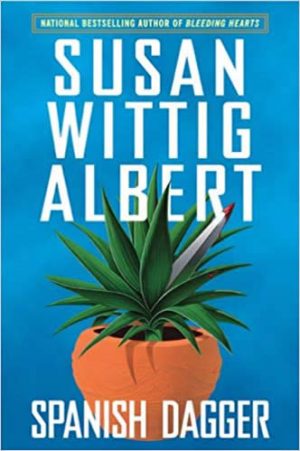 “Albert combines a fast-moving plot with the botanical lore and recipes that her readers have come to expect. Solid entertainment well within cozy fans’ comfort zone.”
–Booklist

Between the herb shop, the catering business, and a weekend paper-making class, China Bayles and her friends have as much work as they can handle. Of course, that doesn’t stop the rest of their lives from going on. Ruby, for example, is troubled by her mother’s strange recent behavior, and upset that her ex-boyfriend has stood her up yet again. Meanwhile, China’s half brother, Miles Danforth, is opening up old wounds, trying to investigate their father’s death—an accident, China insists, and a very cold case.

Although she can’t stop her husband from accepting Miles’ request to handle the investigation—after all, McQuaid is a PI who hasn’t had a bite in months—she could at least put the unsavory business out of mind by gathering supplies for making paper. But in a patch of yucca plants, which make great paper, she finds a very dead body—cause of death, unknown. Pecan Springs Chief of Police Sheila Dawson is on the case, but circumstances require China to lend a helping hand, behind the scenes, of course. Meddling? Maybe. But if China can find the clues that lead to the killer, who’s keeping score?

“Spanish dagger” is one of the many folk names for the striking, statuesque Yucca, a genus with some 40-50 species of perennials, shrubs, and trees with tough, sword-like leaves. A member of the Agave family and one of the most common herbs of the Southwest, Spanish dagger can be seen along roadsides, in pastures and meadows, and across the arid plains. The plant has a great and varied utility in many native cultures, supplying food, drink, medicine, clothing, footwear, and even construction materials to peoples throughout the Americas.

“China’s warmth and sensitivity . . . endear her to readers, while her investigative skills make her a leader among female sleuths. . . A leisurely cozy with a Southwestern flair.”
—Publishers Weekly

“Add another fragrant bloom to the dozen already in the bouquet of Albert’s herbal cozies.”
—Publishers Weekly