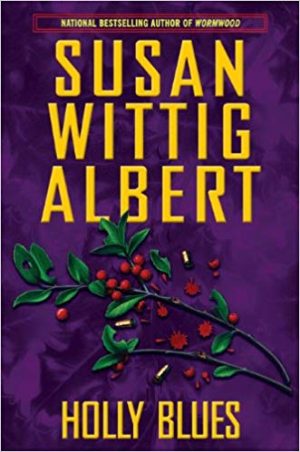 “Holly Blues is a fast-paced whodunit packed with murder and mayhem, spiked with humor and laced with uncommon sensibility.”
—San Antonio Express-News

It’s Christmas in Pecan Springs—maybe a blue Christmas, with the current downturn in the economy, the sadness of young Caitlin (China’s niece and now adopted daughter), and the abrupt reappearance of Bad-Penny Sally, McQuaid’s ex-wife and Brian’s mom.

As usual, Sally has issues, lots of them. Among them: her Bad-Girl history and her other-self, Juanita, who loves high-style and big money.

China is ready to forgive and forget (almost), but thinks again when a stalker enters the picture, looking for Sally. And then Sally’s sister turns up dead. Is she next? McQuaid and China team up on this one to keep a blue Christmas from turning blood-red.

Holly (Ilex) is a genus of approximately 600 species of flowering plants in the family Aquifoliaceae.

Several holly species are used to make caffeine-rich herbal teas. The South American Yerba Mate (I. paraguariensis) is boiled for mate, an invigorating drink. The leaves of Guayusa (I. guayusa) are used as a stimulant and have the highest known caffeine content of any plant. Natives in southern North and Central America, use Yaupon (I. vomitoria), as a ceremonial emetic called “black drink,” or (in more moderate quantities) as a stimulant.

In ancient Rome, holly was gathered to celebrate the solstice feast known as the Saturnalia, in honor of the god Saturn, whose season this was. The Romans believed that the shiny, sharp-pointed leaves of evergreen holly protected their homes against lightning bolts, and that the red berries repelled witches and other mischievous or evil spirits who might seek indoor hospitality during the coldest weeks of the year. Holly sprigs were also exchanged as tokens of friendship, offering a sincere wish that the recipient might enjoy a season free of bothersome bolts from the blue.

In Argentina, Uruguay, Paraguay and southern Brazil, people drink a tea-like beverage called Yerba Mate. It is brewed from the leaves and stems of Ilex paraguarensis, a tropical tree that usually grows to around 45 feet tall. The taste of the yerba mate leaf is similar to that of green tea, but with a sweeter, more pungent taste, and more nutrients. In North America, the tea is often brewed with mint or a lemon herb (lemon balm or lemon thyme).

“Add another fragrant bloom to the dozen already in the bouquet of Albert’s herbal cozies.”
—Publishers Weekly

Click above for the PDF of the recipes from the book. This set includes directions for  China’s frequently-requested recipe for Nopales Salad (a salad made from prickly pear cactus pads). And more, of course. Print or download and share with friends.