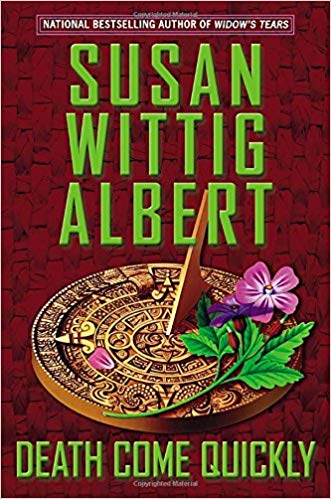 “A dynamic cast of characters and an interesting blend of cold cases and modern murder.”
—Booklist

When China’s and Ruby’s friend Karen Prior is mugged in a mall parking lot and dies a few days later, China begins to suspect that her friend’s death was not a random assault. Karen was a filmmaker supervising a student documentary about the fifteen-year-old murder of a woman named Christine Morris and the acquittal of the man accused of the crime. Is it possible that the same person who killed Christine Morris targeted Karen?

Delving into the cold case, China learns the motive for the first murder may be related to a valuable collection of Mexican art and is determined to track down the murderer. But is she painting herself into a corner from which there’s no escape?

Watch “Central Texas Gardener”: Susan with show host Tom Spencer, of KLRU/TV, talking about Mourning Gloria and the effects of psychoactive plants that wake us up, make us drowsy, and make us high. For the YouTube video of the show, go here.

In European folk medicine, Geranium robertianum (also known as Herb Robert, death come quickly, stinky Bob, and cranesbill) was used as a remedy for nosebleeds and toothache. The odor of freshly picked, crushed leaves resembles burning rubber and is said to repel mosquitoes. The flower buds were thought to resemble a stork’s bill, and this analogical association suggested that the plant might enhance fertility. It was said to bring good luck, but only if it was not carried indoors. To do so invited death. —China Bayles, “Herbs of Good and Ill Omen,” Pecan Springs Enterprise

Click above for the PDF, which includes the recipe for McQuaid’s Secret Barbeque Sauce. If anybody asks, McQuaid always says, “It’s the beer.” But really, it’s the combination of the beer, vinegar, and molasses–plus a few other interesting ingredients. You may print or download and share with your book club or friends.